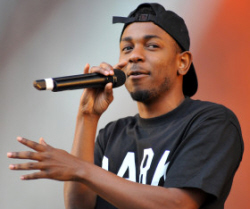 Kendrick Lamar Duckworth was born on June 17, 1987 in Compton, California, to parents from Chicago, Illinois.  His first name was given to him by his mother in honor of singer Eddie Kendricks.  In 1995, at the age of eight, Lamar witnessed his idols, Tupac Shakur and Dr. Dre, film the music video for their hit single “California Love”, which later proved to be a very significant moment in his life.  As a teenager, Lamar attended Centennial High School in Compton, where he was a straight-A student. 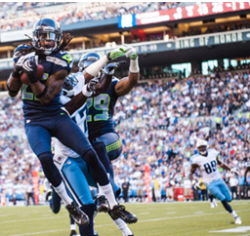 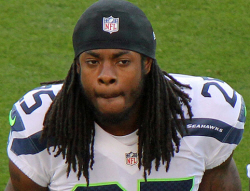 Richard Sherman was born in Compton, California, where he attended Dominguez High School, starring in football and track and field.  As a senior in 2005 he accounted for 1,030 all-purpose yards, including 870 yards on 28 catches and three punt returns for touchdowns.  He also recorded 45 tackles, eight pass breakups and one interception as a defensive back, and helped Dominguez to a CIF Southern Section Division III title with a 41-14 victory over Sherman Oaks Notre Dame High School in the championship game.  He graduated from Dominguez High School in 2006, where his classmates voted him the “Male student most likely to succeed.”  A scholar-athlete, he was salutatorian (ranked second) in his high school class.  He graduated high school with a 4.2 GPA. 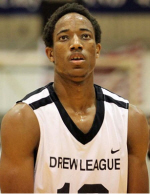 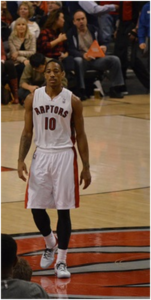 DeMar DeRozan attended Compton High School and was ranked as one of the top college recruits in the nation from the class of 2008. He was ranked #3 in the nation by Rivals.com and #6 by Scout.com.

As a senior averaging 29.2 ppg and 7.9 rpg, DeRozan led Compton High School to a 26-6 record, a second consecutive Moore League championship and the CIF Division IAA Southern Section quarter-finals. For his efforts he was awarded the Moore League Most Valuable Player Award and named to the California All-State team. DeRozan was a member of the 2008 McDonald’s All-American Team, and also won the 2008 McDonald’s All-American Slam Dunk Competition.  He was also invited to play in the 2008 Jordan Brand Classic at Madison Square Garden and the Nike Hoop Summit, where he scored a team-high 17 points.  DeRozan’s achievements on the court in his senior year saw him earn first-team Parade All-American honors and First Team Best in the West honors. 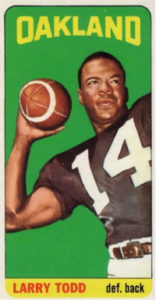 Larry Todd, a former wide receiver and running back for the Oakland Raiders. Todd was troubled by injuries during his six seasons with the Raiders from 1965 to 1970. One of his best games came during his rookie season when he rushed 20 times for 134 yards and one touchdown against the Houston Oilers.  He was limited by a broken arm in 1968 and played out his career as a running back. 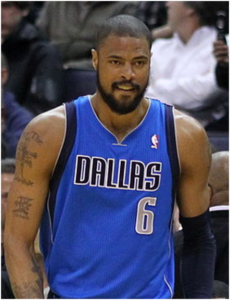 Tyson Chandler was born to Frank Chandler and Vernie Threadgill, though he did not meet his father Frank until later in his life.  He grew up in a family farm in Hanford, California, just south of Fresno, California.  Chandler began playing basketball at the age of three years on a basket Chandler’s grandfather, Cleotis, fixed on a tree. Chandler grew up doing farm work such as milking cows, slopping pigs, and cultivating crops. At the age of nine years, Chandler and his mother moved to San Bernardino, California; he was already nearly six feet tall. As a child, Chandler was teased because of his height; children on his school basketball team joked that he was older than he really was, and that he had been left back several times in school.

Chandler and his family then moved to Compton, California, where he enrolled at Dominguez High School, a school known for its athletics, producing basketball players such as Dennis Johnson and Cedric Ceballos. In his freshman year, Chandler made the varsity team and played with future NBA player Tayshaun Prince, who was then a senior. With the Dominguez Dons, Chandler became a teenage sensation; current players such as DeMar DeRozan watched him play and claimed “he was like Shaq”. Point guard Brandon Jennings, who was a ball boy for Dominguez at the time, said, “You’d see the girls around Tyson, the Escalade he drove, and you wanted to be like him”.  Chandler earned accolades from Parade Magazine and USA Today, and was selected to the McDonald’s High School All-America Team. As a freshman, he was profiled on current affairs TV program 60 Minutes.

In his junior year, Chandler averaged 20 points, 12 rebounds, 6 assists and 3 blocks. In his senior year, Chandler led Dominguez to a state championship and a 31–4 record, averaging 26 points, 15 boards, and 8 blocks a game.[2] Chandler was recruited by several universities and considered UCLA, Arizona, Syracuse, Memphis, Kentucky and Michigan. Chandler then declared for the 2001 NBA Draft as a prep-to-pro.

Anthony Anderson was born on August 15, 1970, in Augusta, Maine, but was raised in Compton, California, a suburb of Los Angeles. His mother, Dora, was a movie extra, so young Anthony literally grew up on film sets. By the age of five, Anderson followed in his mother’s footsteps and began appearing in television commercials. He showed such promise as an actor that he attended a Los Angeles performing arts high school, where he won an award given by the Afro-Academic, Cultural, Technological and Scientific Olympics (ACT-SO), a program sponsored by the National Association for the Advancement of Colored People (NAACP). The annual award recognizes students in grades nine through twelve “who exemplify scholastic and cultural excellence.” His mother, Doris (née Hancox), was a telephone operator and actress, and his stepfather, Sterling Bowman, was a native of Little Rock, Arkansas, who moved to Los Angeles to work in the steel mill industry before opening a chain of three clothing stores.

Anderson has stated that his first attempt at standup comedy was a failure. Although this experience was a blow to his ego, he did meet his future friend and fellow comedic actor Guy Torry there, who consoled him after the show and encouraged him to keep getting up on stage. He and Guy would later act together in the Eddie Murphy film titled Life.  Anderson is an alumnus of the Hollywood High School Performing Arts Magnet’s Class of 1988 and Howard University. He trained with actors such as Avery Brooks, Ruby Dee and Ossie Davis. 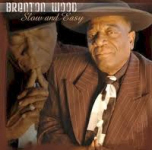 The family moved to San Pedro in Los Angeles, California when Wood was a child. He attended San Pedro High School for part of his freshman year before moving to Compton, where Brenton became a member of the Compton High School track team and received several awards for his athletic achievements.

Following his high school graduation, Wood enrolled in East Los Angeles College. Soon after, he took the stage name Brenton Wood, possibly inspired by the wealthy Los Angeles enclave of Brentwood (some sources state that the name is in honor of his “home county”), with a second possible connection of Bretton Woods. During this period, his musical interests began to manifest themselves. He was inspired by Jesse Belvin and Sam Cooke, and he began cultivating his songwriting skills, also becoming a competent pianist.

Early singles for Brent Records and Wand Records failed to chart. Wood signed with Double Shot Records, and his “The Oogum Boogum Song” reached #19 on the US Billboard R&B chart and #34 on the Billboard Hot 100 in the spring of 1967. In Southern California, “The Oogum Boogum Song” hit the top 10 on KGB-FM and #1 on KHJ. Wood’s biggest hit came a few months later, as “Gimme Little Sign” hit #9 on the pop chart, #19 on the R&B charts, #2 on KHJ, and #8 in the UK Singles Chart, sold over one million copies; and was awarded a gold disc. The title is not actually sung in the song; the chorus instead repeats “Give Me Some Kind of Sign.” Wood’s “Baby You Got It” peaked at #34 on the Hot 100 during the last week of 1967 and #3 on KHJ on 31 January 1968. 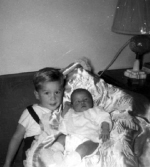 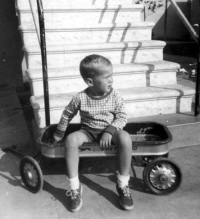 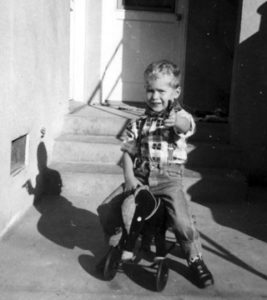 After graduating from Yale, Former U.S. President George H. W. Bush moved his young family to West Texas. His father’s business connections proved useful as he ventured into the oil business, starting as a sales clerk with Dresser Industries, a subsidiary of Brown Brothers Harriman (where Prescott Bush had served on the board of directors for 22 years).  While working for Dresser, Bush lived in various places with his family: Odessa, Texas; Ventura, Bakersfield and Compton, California; and Midland, Texas.  (According to eldest son George W. Bush, then age two, the family lived in one of the few duplexes in Odessa with an indoor bathroom, which they “shared with a couple of hookers”.)  Bush started the Bush-Overbey Oil Development Company in 1951 and in 1953 co-founded the Zapata Petroleum Corporation, an oil company that drilled in the Permian Basin in Texas.  In 1954 he was named president of the Zapata Offshore Company, a subsidiary which specialized in offshore drilling.

The Bush family only called the Los Angeles County suburb home for six short months in 1949 and 1950. George H. W. Bush, the future 41st president of the United States, was on a temporary assignment to California for Dresser Industries, selling oil drilling bits for a Dresser subsidiary named Security Engineering Company. His son and the future 43rd president—pictured above playing cowboy outside the Bushes’ Compton home—was only three years old at the time. They lived in a now-demolished apartment complex at 624 S. Santa Fe Avenue.

Of course, the Bushes’ Compton was not the city we know today. In the words of historian Josh Sides, Compton in the late 1940s and early 1950s was “exclusively white with an extraordinary web of racially restrictive covenants with a very aggressive policing strategy about keeping black people out.” (Today, incidentally, Latinos comprise a majority of Compton’s population.)

The Bushes bounced around Southern California—with temporary homes in Ventura, Huntington Park, Bakersfield, and Whittier, in addition to

Compton—before moving to Midland, Texas, in May 1950.

Image: George W. Bush plays cowboy in Compton, California, in the fall of 1949. Courtesy of the George Bush Presidential Library and Museum.