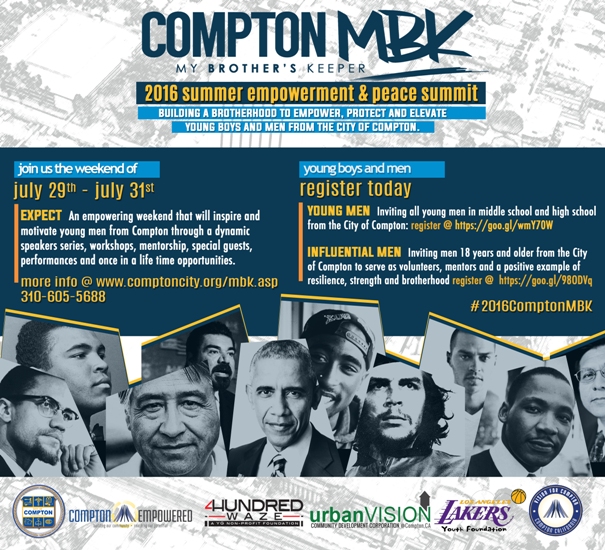 An empowering weekend that will inspire and motivate young men from Compton through a dynamic speakers series, workshops, mentorship, special guests, performances and once in a life time opportunities.

Summary:
On the two year anniversary of My Brother’s Keeper, MBK Task Force Chair Broderick Johnson reflects on MBK’s impact across the country and on the work still underway.

Two weeks ago, I joined Acting Secretary of Education, Dr. John King, and other colleagues from the Administration in Miami for a series of events, including Miami-Dade County’s My Brother’s Keeper Action Summit and the launch of our MBK School Success Mentors Initiative. My last event of the day was a roundtable with a group of boys and young men participating in the Miami Children’s Initiative in Liberty City. During similar discussions, we always ask the youth to tell us about their lives—their challenges, fears, hopes, and dreams. And, we frequently ask them if there’s a message they would like us to take back to President Obama on their behalf. On this particular Friday, we got a range of “asks” from better school bathrooms and computer labs to more job opportunities.

We decided to ask the entire discussion group how many of them knew someone personally who had also been a victim of gun violence—every single hand went up.

At one point, I noticed a little boy of about 10 who was wearing a “Rest in Peace” t-shirt that displayed pictures of two African American boys. He told us the two pictures were of his cousins, one age nine, the other thirteen. He said they had both been shot and killed recently. We decided to ask the entire discussion group how many of them knew someone personally who had also been a victim of gun violence—every single hand went up. The sad but simple fact is that, five young students had been killed in their neighborhood this school year, already. Here we sat among children—yes they are children—who so early in their lives had already experienced the unthinkable.

But, what then struck me the most about our discussion was that when we went around the room asking these young guys what they wanted to do when they grew up, every boy, from 9 to 19, had something to say about their goals for their futures—where they wanted to attend college and their professional pursuits (coders, lawyers, entrepreneurs and yes, professional athletes). In the face of unspeakable violence and intergenerational poverty, these young men have bright eyes and big dreams.

And, thanks to organizations like Miami Children’s Initiative, they also have access to youth job opportunities, college tours, adult advocates, and mentors. It’s moments like these that remind me that every child’s life has meaning and is worth our investment. It speaks to how critical it was on February 27, 2014 that President Obama launched My Brother’s Keeper (MBK).

Two and a half years ago, the President spoke to the nation after the verdict in the Trayvon Martin case. He talked about the angst and anger that many parents and families were feeling, and about the challenges facing too many young people, boys and young men of color in particular. He observed: “There are a lot of kids out there who need help who are getting a lot of negative reinforcement,” and “There has to be more we can do to give them the sense that their country cares about them and values them, and is willing to invest in them.”

Six months later, the President launched My Brother’s Keeper in a ceremony held in the East Room of the White House. During his remarks, the President recognized the challenges that can disproportionately affect boys and young men of color – and the need to find ways to ensure that they and their peers have every opportunity to reach their full potential:

“After all, these boys are a growing segment of our population. They are our future workforce. When, generation after generation, they lag behind, our economy suffers. Our family structure suffers. Our civic life suffers. Cycles of hopelessness breed violence and mistrust. And our country is a little less than what we know it can be. So we need to change the statistics — not just for the sake of the young men and boys, but for the sake of America’s future.”

MBK is about obliterating the barriers our kids face. It’s about building strong, lasting bridges to opportunity for boys and girls, young men and young women, no matter what their background or the circumstances into which they were born. It’s about investing in what works, acting with a sense of urgency, basing strategies on data and evidence, and having the courage to call-out and tear down discrimination in every system and policy where it shows up. And, in two years we could not be more excited about the momentum, energy, and enthusiasm that has been sparked all across the country.

Foundations, businesses, and social enterprises have responded to the President’s call to action, committing more than $500 million in grants and in-kind resources and $1 billion in financing through community banks, including investments in safe and effective schools, mentoring programs, juvenile justice reforms, and school redesign.

In May, a group of private sector leaders joined together to launch the My Brother’s Keeper Alliance, which is committed to strengthening to unite leaders across philanthropic, nonprofit and private sectors to support sustainable, long-term and effective engagement.

Just this morning, the same group of foundations that made an initial commitment of support to My Brother’s Keeper when the initiative was launched, announced their “Ban-the-Box Challenge.” Inspired by President Obama’s action to move toward banning the box in the federal government’s hiring process, the Executive’s Alliance to Expand Opportunity for Boys and Young Men of Color’s new campaign urges foundations nationwide to pledge to adopt fair chance hiring practices, including banning-the-box.

In January, MENTOR: The National Mentoring Partnership and the NBA family formally launched the In Real Life campaign as part of the league’s response to MBK. The campaign challenges Americans to mentor so that every young person is connected to the kind of meaningful relationships that provide networks of support and opportunity. In addition to an online action platform and PSAs from NBA players, other celebrities like Kendrick Lamar have also gotten involved in sharing their mentoring stories.

And today, in honor of our anniversary, acclaimed actor Michael B. Jordan released a PSA on the vital role parents, mentors, and other caring adults play in the lives of our youth.

Over the past two years, the Federal government has sharpened its focus on identifying and attacking the root causes that impair successful life outcomes for our youth, including boys and young men of color. Over the course of the past year, the work of the MBK Task Force has led to new and expanded grant programs and important federal guidance, and also inspired new public-private partnerships. Last week alone, Task Force agencies, in partnership with the White House, launched the Summer Opportunity Project, the MBK School Success Mentor Initiative and Chronic Absenteeism Ad Council Campaign. The Department of Education also announced Equity in IDEA to tackle disproportionality in special education.

And just today, we launched the inaugural National Week at the Labs, a unique collaboration involving the White House Council on Women and Girls (CWG) and the MBK Task Force. Throughout the week, more than 50 National Labs from across the Federal system in more than 20 states will open their facilities to thousands of youth from nearby neighborhoods, including the more than 200 communities that have accepted the MBK Community Challenge nationwide. We kicked off the National Week at the Labs with our own White House Day at the Labs today where students from Washington, D.C. and Baltimore will participate in hands-on activities with scientists and engineers to learn about careers in STEM.

Other policy highlights over the past year include the following:

All of these efforts, and they are just a few of all that has been accomplished, address recommendations from the May 2014 MBK Task Force Report to the President, and we’re not slowing down.

There are now almost 250 communities that have accepted the My Brother’s Keeper Community Challenge – representing 49 states, Washington, DC and 19 Tribal nations. Mayors – both Republicans and Democrats – as well as tribal leaders and county executives are working with community leaders and youth development experts to design and implement rigorous action plans that are strengthening communities and transforming lives.

In recent months, the MBK leadership team has visited many of these MBK Communities, and what we are seeing on the ground is having impact and being built to have lasting impact.

The President launched My Brother’s Keeper urging the public and private sectors to focus more on “what works” and to adopt new and promising, evidence-based collaborations: efforts that rigorously focus on milestones that range from cradle to college and career. While the challenges facing our youth require urgent attention, MBK is about sustaining change for the long haul. When the President spoke at the launch of the MBK Alliance in May, he said: “This will remain a mission for me and for Michelle not just for the rest of my presidency but for the rest of my life.”

I could not be more proud of the extraordinary work underway, resulting in powerful alliances, innovative approaches, and a new and growing movement for equality and opportunity. The bright and hopeful young folks we met in Miami should know that their President loves them, has their backs, and is inspiring the nation to see them as all of our children.