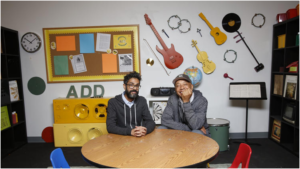 It’s the lunch hour at Russell Simmons’ downtown Los Angeles office, and the hip-hop mogul’s scrappy video team is setting up cameras in their break room.

Simmons’ squad of Internet personalities and producers clear away pizza boxes for their live Facebook shoot, in which they rib each other in a comedy roast style, while an artist puts the finishing touches on his American flag mural on a white office wall nearby.

In his glass-walled corner office, Simmons reminisces with his business partner, Sanjay Sharma, about the night before, when their company All Def Digital filmed an all-star comedy roast of Snoop Dogg. Simmons holds up his smartphone to show off a photo of the set at the Avalon Hollywood, complete with a white throne for the rap star.

“That can’t be how good it looks,” he tells Sharma, in disbelief. “This  … set looks amazing.”

Simmons may be best known for popularizing landmark rappers with Def Jam Recordings and helping to make hip-hop a global commercial force. But now he’s got a new mission — to turn his nascent online video network into a full-fledged media company.

All Def Digital specializes in short comedy videos heavily influenced by, and sometimes lampooning, hip-hop culture. The start-up has expanded rapidly into making TV shows for well-known channels like HBO, Fusion and MTV as well the streaming service Spotify.

The 59-year-old entrepreneur, a vegan who starts his days with hot yoga and cryotherapy, says there’s a massive audience for so-called urban programming that remains largely ignored by Hollywood. That vacuum, he says, gives him a huge opportunity to create authentic, edgy shows at a time when Hollywood has come under criticism for its lack of opportunities for African Americans.

Simmons points to recent hip-hop-themed hits like N.W.A film “Straight Outta Compton,” Fox show “Empire” and rap musical “Hamilton” as evidence of the audience appetite for what he wants to make.

“You have a Hollywood that’s not as sensitive to the urban and cool pop sensibility that exists in mainstream America,” Simmons said.

All Def appears to be getting traction. Its videos — often laced with racial language, raunchy humor and profanity — garner 300 million video views a month, thanks to viral hits like its music parody “Fat Drake” and its online series “Blackie Sack,” about a professional African American Hacky sack player.

The company has 40 employees and produces 20 to 30 pieces of video a week, much of it from its Flower Street building downtown. Executives would not disclose financials, but they say annual revenue is up 150% over last year. All Def Digital has raised $15 million in capital from prominent investors such as Greycroft Partners and marketing agency WPP’s venture capital arm. Simmons owns about a third of the company.

All Def makes money by licensing content to networks and by partnering with brands. All Def recently teamed with Sony Pictures to promote the film “Don’t Breathe” with a new music video.

Moving beyond its YouTuber roots, All Def also is producing a weekly sketch comedy show for MTV called “ADD-TV” set to debut early next year, along with stand-up comedy specials for NBCUniversal’s comedy app Seeso, which also picked up “Blackie Sack.”

Last month, All Def filmed its Snoop Dogg roast for the cable network Fusion and an episode of its upcoming Spotify music series — for a combined $1 million in production spending in one night.

Simmons’ aim is to turn All Def into hip-hop’s answer to Vice Media — the multifaceted new media empire that started as an indie rock ‘zine and now produces a news documentary show and runs the Viceland cable channel.

Whether Simmons can blaze a similar path remains to be seen, analysts said. Tech companies and traditional media players are still trying to navigate massive changes in consumer behavior.

Simmons “is creating something that, if he gets it right, can thrive in that hybrid environment where the established players often have a hard time bridging the divide,” said Dan Cryan, a digital media analyst for IHS Markit.

Those who know Simmons describe him as a tireless entrepreneur who can spot emerging talent. HBO Chairman Richard Plepler credited him with launching the careers of once-little-known comedians who appeared on “Def Comedy Jam” in the 1990s, such as Bernie Mac and Chris Tucker.

“He sees around corners,” Plepler said. “He spots voices who have something to say before most people understand how resonant those voices are.”

Simmons brings his indefatigable nature to his business dealings, as Sharma, the president and chief executive of All Def Digital, discovered when they first met in 2014. His initial meeting with Simmons was supposed to last just 30 minutes. That turned into a nine-hour hangout that included a 4 p.m. session at Hot 8 Yoga in Beverly Hills and a late-night comedy show.

Sharma, 43, said he and Simmons shared a similar vision for the new company.

“I was blown away by how laser focused he was and how much he understood about the nuances of digital media,” said Sharma, who had long collected Def Jam records on vinyl.

Simmons has tapped into his relationships with heavyweights throughout the entertainment industry, including Lucian Grainge, the chairman of Universal Music Group, which recently became an investor in All Def and is collaborating on several of its projects.

“Few people in the world have had Russell’s impact on music, film, television, fashion and culture,” Grainge said.

Artists and labels have embraced some of All Def’s novel ideas for promoting new music, such as its new video series for Spotify called “Traffic Jams.” The series pairs a music producer and a rapper in a Range Rover in Los Angeles during rush hour, and forces them to create a new song before they reach their destination — a warehouse where 100 fans wait to hear the new track drop. Spotify has ordered eight episodes of the series.

Another online video series, called “Arts+Raps,” uses small children to interview rappers around an arts and crafts table in the company’s offices.

Simmons sometimes even participates in the videos. One episode features Simmons getting grilled by a pair of grade schoolers about veganism and meditation.

While not all show ideas are his, Simmons is a hands-on creative force. He helped edit All Def’s “World Star” (a spoof of “The Office”), and has come up with some of the more offbeat ideas, including a possible TV series about an Atlanta cop who goes to Copenhagen.

A Queens native, Simmons first made a name for himself promoting and producing hip-hop acts in the 1980s. He launched Def Jam Recordings in 1984 with Rick Rubin, known for signing Public Enemy and other major acts.

“The image of the hip-hop mogul really originates with Russell Simmons,” said Todd Boyd, a cinema and media studies professor at USC. “He was one of the pioneers.”

Simmons moved from New York City to Los Angeles in 2013 to be closer to his two daughters, initially staying with his friend and movie producer Brett Ratner. Shortly afterward, he created All Def Digital.

“Not every movie can star Kevin Hart,” he said, referring to one of the movie industry’s most bankable actors. “The diversity that’s inspiring to me is when cultures collide.… I’m doing something that I think is commercial and that people need.”

Simmons said he has film projects in development at Universal Pictures, 20th Century Fox and Netflix. The film projects include a movie about his own life, based on his 2001 memoir “Life and Def: Sex, Drug, Money + God.” The book opens with an anecdote about nearly shooting someone when he was 15 and selling drugs. He said he hadn’t given much thought to a movie about his life until he moved to Los Angeles.